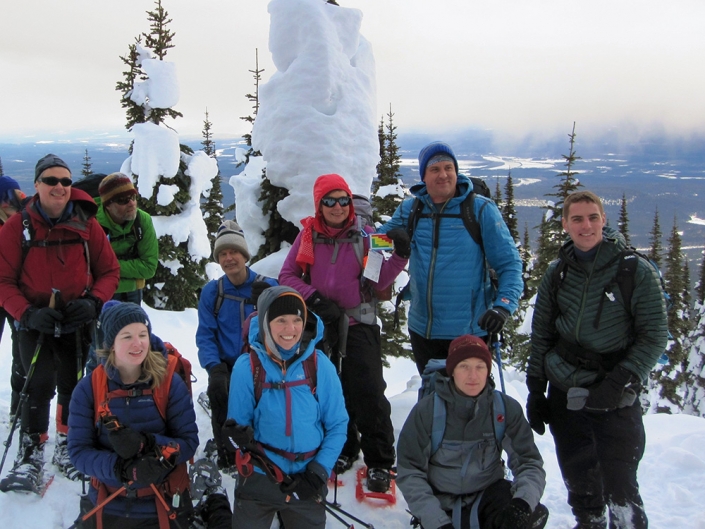 The course was taught by Craig Evanoff and Bonnie Hooge of Dezaiko Lodge, northeast of Prince George. The first day was composed largely of classroom instruction at UNBC, while the second ‘field day’ was held adjacent to the Sugarbowl trail, 80 km east of the city.

The Ramblers became interested in organizing a members' AST I course after member, Mike Nash, said at a club scheduling meeting in late 2017 that Ramblers needed to take such a course to improve safety if they continued to increase club snowshoes into the backcountry. After an initial attempt to organize such a course in the winter of 2018 failed, the club was successful in generating enough interest among members this winter to make organizing such a course a reality. The fact that the Federation of Mountain Clubs of BC awarded the Ramblers a $440 club grant in 2018 to help subsidize such a course among members also proved to be a catalyst.

For those who signed up for the course, they had homework to do even before instruction began. Each member was asked to watch a short video posted on Avalanche Canada’s website involving a successful avalanche rescue near Terrace in 2013. They were then asked to take a much lengthier Avalanche Canada online tutorial, that covered such topics as how avalanches are formed, how backcountry travellers can recognize potential avalanche terrain, how avalanche risk can be reduced while planning a backcountry trip or actually while being on one, and how to perform an avalanche rescue. The first classroom day expanded on a number of the topics introduced in the tutorial, introduced participants to online resource material and booklets to help assess regional avalanche danger, and introduced participants to avalanche rescue equipment (portable shovels, probes and digital transceivers). The classroom session ended with an exercise out in a UNBC parking lot where students learned how to use digital transceivers.

The Ramblers believe that this is the first AST I course ever organized specifically for snowshoers among Federation of Mountain Clubs of BC clubs.